Scoop is opening its election year coverage with an exciting initiative and would appreciate your support. The Open News Project is Scoop’s attempt to ensure political news coverage this election year leads to better outcomes for our society and all New Zealanders. We believe political coverage should focus less on the political game and more […] 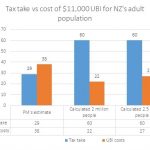 In March 2016 the Labour Party held its Future of Work Conference. Notable speakers were Guy Standing, author of The Precariat and former Clinton-era Secretary of Labour Robert Reich. The idea of a Universal Basic Income (UBI) was raised in a discussion paper as being potentially the single most popular idea being discussed internationally to […]

This post is to ask for your support of the new Scoop Foundation for Public Interest Journalism. The foundation is a newly established charitable trust dedicated to helping Scoop Media and public interest journalism flourish in New Zealand. It is Scoop’s response to the worldwide crisis in journalism caused by the dramatic shrinkage of advertising […]