You are here: Home / Democracy / The Royal Commission on Social Policy’s April Report 30 years on 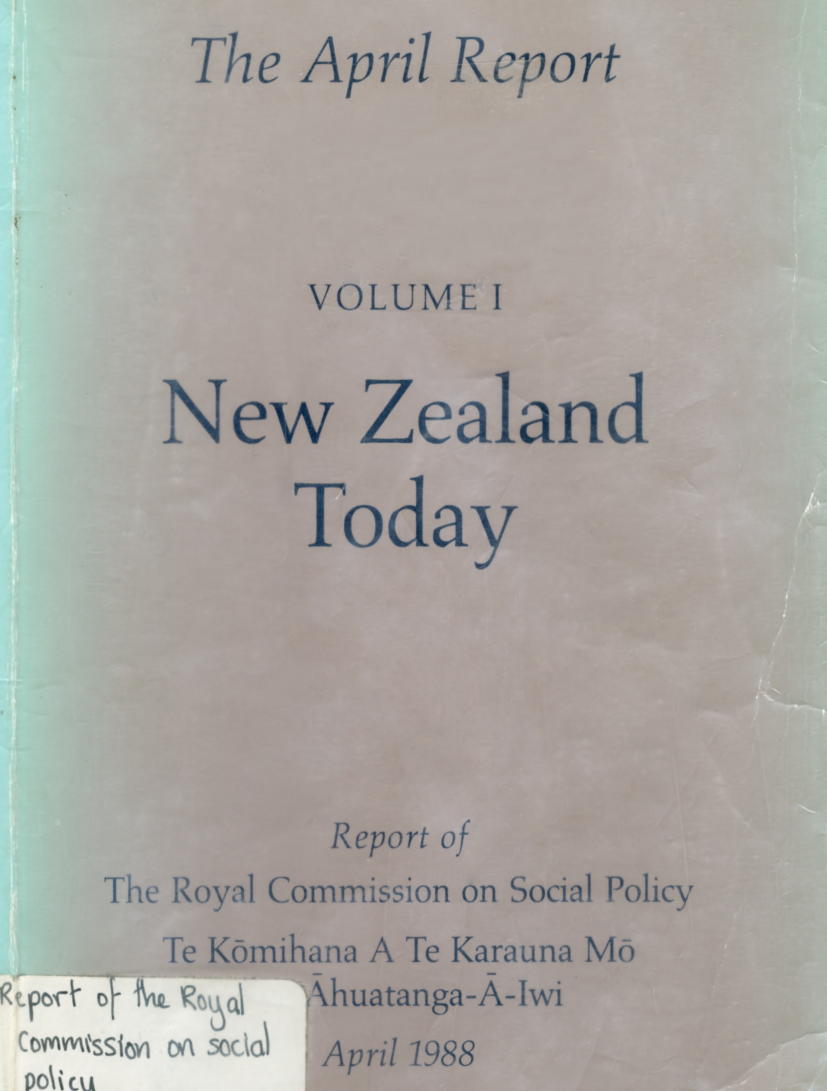 April 29 2018 was, as well as being the 178th Anniversary of the signing of Te Tiriti by Wellington tribes, also the thirtieth anniversary of the publication of the report of the Royal Commission on Social Policy (Te Komihana a te Karauna mo nga Ahauatanga-A-Iwi). Subtitled the “April Report” it runs to about 4000 A5 pages in 5 pale blue soft-covered volumes.

Links to the full text

Much derided following its publication the work of the Commission could be seen as a sop by the Fourth Labour Government (1984-1990) to those parts of the electorate who were alarmed by the neo-liberalism with its privatisations, market solutions and user-pays approaches.

The report was published in the same year as Professor Marilyn Waring’s Counting for Nothing and had in common with it a concern with the use of GDP as a measure and in addition it contains the first extensive discussions by a government body in NZ of:

The report also provided lengthy descriptions of the socially progressive thinking which was making its way into broader New Zealand society. There was a chapter on the environment and one on the middle class capture of public services. The commissioners endorsed a world view that there were parallels between Pākehā and Māori  values  with respect to social well-being. (see appendix 1).

A few of the perspectives presented had begun to adopt the language of markets and neo-liberal ideas but many of the submissions and most of the content ran counter to the adoption of these market fundamentalisms  and privatisation of public services and property.

There are papers from experts of the day on how well-being could be demonstrated across a series of sectors – elder care, Māori, women, people with disabilities as well as extensive material on employment, housing, education, health, social programmes, multi-culturalism, feminist issues, the importance of te reo and of te Tiriti  as a foundational document for New Zealand.

The scale of the consultation

The brief for the Commission was wide and the scale of consultation unprecedented. The Commission staff are listed in the report, and they numbered more than 60 over the course of the investigation, and hundreds of people were involved in writing the chapters. More than 6000 submissions were received from hundreds of organisations and thousands of individuals and many are available in the National Library’s Turnbull Library. The content of the Commission’s papers are held in files at Archives New Zealand.

The Commission ran two extensive road tours,at which the Commissioner’s received evidence and which read today like Royal Progresses, and held meetings in community centres, council buildings and on Marae.

The push for early publication

Scheduled to be a two year process, the Commission was due to finish in October 1988, but it reported early and as a consequence the structure of the report is somewhat less well organised than it could have been. A further iteration of consultation was proposed following the release of draft papers but it never took place. Hence recommendations, apart from those in the first section of volume IV, are not collected into one place and are variously described as “proposals”, “the way ahead”, “new policy proposals” and “futures”. There is no index, some chapters are by named authors, others are anonymous and there is no common style or perspective.  Even the numbering and use of macrons are inconsistent. (Only when the National Library digitised and aligned it with the electronic text has the content been easy to be searched).

The reasons for the rush to publish are outlined in the text of the April report. It was acknowledged at the outset that the process of government could not be put on ice during the consultation. However the publication date was brought forward when the Labour Government, was perceived by the Chair, to have hi-jacked the process. The section in volume 1 which contained a sequential outline of the work of the Commission said.

On 17 December, the Government released a major ‘economic package’ which included explicit statements of policy affecting taxation, income maintenance, and superannuation, and had major implications for other areas of social policy. The Commission had examined the Income Maintenance and Taxation phase of its work programme only a week before, with a view to releasing working drafts of its materials and conclusions in February 1988. The Commission’s Chairman immediately issued a press statement expressing his concern ‘at the impact on the Royal Commission of the major and wide-ranging decisions shaping social policy’ which had been announced, and indicating that the decisions ‘will inevitably be seen as substantially pre-empting work of the Commission in the crucial areas of income maintenance and taxation and significantly affecting other areas of our inquiry’.

In January 1988 it was decided to rush urgently towards publication in April with the possibility of the release of other papers both before and afterwards. The Commissioners reported when announcing the intention to present an early report,

“that the analysis was limited and we have not had the advantage of presenting working papers for comment and discussion as a step in the process of developing the report”.

There were other problems –

In early December (1987) [Christchurch newspaper] The Press had contained reports of the establishment by the Social Equity Committee of Cabinet of 17 ‘task forces’ to enquire into a wide range of social policy matters.

The concerns were somewhat mitigated when the media reports were clarified by the Minister.

The Chairman of the Social Equity Committee, The Right Hon Geoffrey Palmer, called on the Commissioners and explained that his Committee did indeed intend to set up working parties of officials (not task forces) but its programme was a three-year one, and no conclusions would be reached on any of the social policy matters before it without first seeking the views of the Royal Commission

Few direct impacts flowed from publication but a 2008 report  says the Commission:

broadened what issues could be considered as social policy as well as influencing the development of later, more holistic, approaches to social policy. For example, the first Social Report, produced in 2001 (Ministry of Social Development 2001), recognised the importance of the Royal Commission’s work in contributing to debates on the quality of life in this country.

Later the 2002 Local Government Act contained the opportunity for councils to act to provide services that delivered against well-being across the four domains of economic, culture, social and environmental policy and signs are that these are to be reintroduced in 2018. The whole endeavour was opposed by the NZ Treasury (which is ironic given that it is now Treasury that is leading the work on the Living Standards Framework) and thirty years later the new government also has a focus on well-being and it’s measurement, the use of other indicators than GDP and a “fairer and more caring society.”  It is this renewed focus on well-being that makes the Royal Commission’s 30 year old deliberations of relevance to today’s political debates.

Explanation of the layout of the report

A full table of contents is linked here.

(text adapted from the preface to volume 1)

It discusses in fairly extensive overview chapters the broad areas around which the work of the Royal Commission was organised. As explained in the introductory chapter, the first 6 broad areas:

These approach in different ways and with different emphases the features of today’s society which we consider should govern social policy.

There are 5 further overviews in the volume.

These papers raise questions of principle of wide general application. It has seemed sensible to adopt this approach rather than to go directly to particular functional areas such as health, education or housing, or to specific perspectives on social policy such as those of the elderly, the young, the disabled, or ethnic minorities.

called Social Perspectives, contains position papers prepared for the Commission on functional areas and special perspectives by writers with special expertise in the particular subjects.

They draw on the submissions and other work of the Commission and each was prepared in consultation with the Commissioner having responsibility for that subject area. The short overview that precedes the position papers expresses certain conclusions which the Commissioners have reached within the substantial time constraints.

The Māori  concepts are

Elaboration of these concepts clarifies the interrelationship between physical, human, spiritual and cultural dimensions and their need to be viewed together when social policy is considered.

These are compared to Western concepts to find some parallels. Only the fifth point, revealing the creeping impact of financialised thinking could not be aligned with the Māori values.  One can only wonder whether a tortuous debate was needed to arrived at the final wording!

1. The objective of all social policy is to create the conditions necessary for human wellbeing and the achievement of potential.

2. All individual human persons are of intrinsic moral worth; this worth is not derived from personal ability, merit or contribution to society, but is derived simply from their moral status as persons.

3. All persons have interests which provide the basis for an equal claim to consideration, and all persons are worthy of respect in some fundamental, or residual sense, irrespective of differences in respect based on merit or desert.

4. Human beings are social beings; and can only realise their nature, or individual potential, in a community.

5. Human wants are in principle unlimited, and resources limited. In any society which permits freedom of choice, scarce resources must be allocated between conflicting claims in a way that is fair and just, as well as efficient. Justice is a moral requirement that all organisations and institutions should meet. At a pragmatic level, social stability depends on individual differences in material conditions being recognised as just.

Staff of the Royal Commission