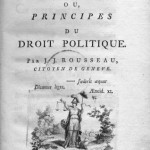 The Social Contract is an old philosophical idea that people consent to be governed.
Effectively this means that people give up some freedoms but benefit from the fairness and order provided by the government. Implicit in the idea is that people have the maximum freedoms consistent with the Social Contract. However there are limits to the powers of government. This is the case especially for democratic governments which are made up of our elected representatives who make decisions on our behalf.