You are here: Home / Democracy / Tony Alexander’s free reign at the BNZ 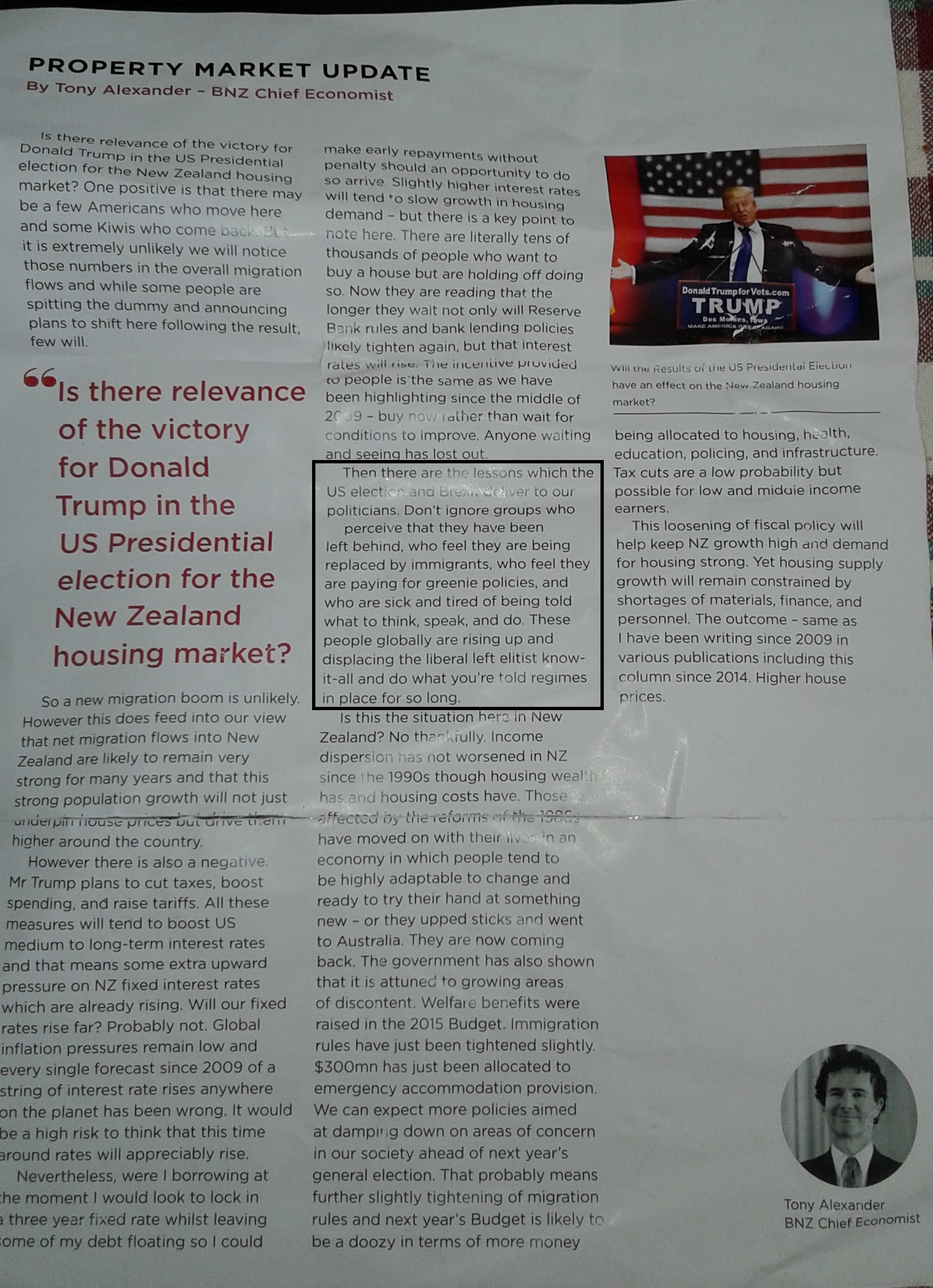 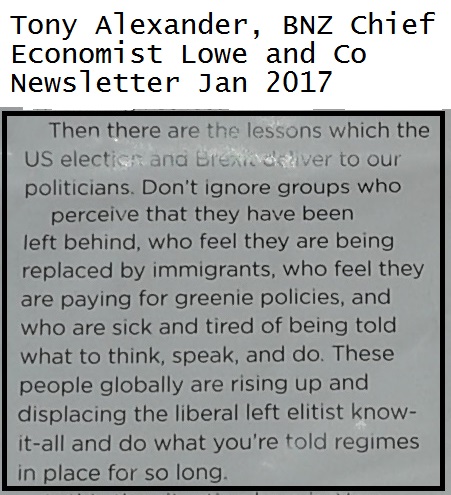 I read in the news recently that the BNZ’s chief economist Tony Alexander has made some demeaning remarks about young people wanting to buy houses and has been stretching the boundaries of his reporting by providing investment advice in the BNZ newsletter.  I am afraid to report that his ability to insult  and mislead real and potential customers is more extensive than this.

In a New Year property market update for Wellington Real Estate Agents Lowe and Co, and in his role as BNZ’s Chief Economist Tony Alexander wrote about “the relevance of the victory for Donald Trump in the US presidential election for the New Zealand housing market”

Alexander wrote  of the reasons why he believes that house prices will continue to rise and that interest rates will remain relatively low, but he also focussed on why NZ is being effectively inoculated by the government against the danger of its own Trump (or, for that matter, Brexit) moment. He characterised these two events as being caused by

“groups who perceive that they have been left behind, who feel they are being replaced by immigrants, who feel they are paying for greenie policies, and who are sick and tired of being told what to think, speak and do.  These people globally are rising up and displacing the liberal left elitist know-it-all and do what you’re told regimes in place for so long”.

He says NZ is avoiding these problems because ‘income dispersion’ (AKA inequality) has not continued “to worsen since the 1990’s” except for housing and associated costs”. He wrote enthusiastically that the flexible labour market since the 1980’s has allowed people to ‘try something new’ or to ‘move to Australia’.  He continues in this vein for the remainder of the article praising a government that raised welfare benefits in the last budget and advising that we can expect further policies ‘dampening down areas of concern in our society ahead of next year’s election’.

Throughout his article many of his statements about NZ, the Brexit vote and the Trump victory are simply incorrect. Internationally recent research from The World Bank, OECD and IMF points to rising poverty and inequality and the hopelessness that comes in its wake (and not green policies or liberal/left governments) as the likely source of extreme politics and societal risk[i][ii]. In the UK the Joseph Rowntree foundation found that poverty is correlated with a higher likelihood of voting for Brexit[iii] and World Bank research finds that crime increases with increasing inequality. [iv].

In NZ rampant inequality is not being mitigated by government policy. Evidence from the basic tool used to measure income inequality (the Gini coefficient) shows that although inequality was falling in the years prior to the 2008 Global Financial Crisis (GFC) mainly because of Working for Families payments, it has been rising since the GFC[v][vi][vii]. Oxfam’s recent work on inequality has shown that 2 New Zealanders have more wealth than the lowest 35%.  Housing costs are far from irrelevant to rising rates of hardship and inequality and the latest Ministry of Social Development household report shows that inequality is worsening under both measures[viii]. Austerity policies across the public and voluntary sector are causing desperation to both service providers and recipients.[ix] [x].New work opportunities here or in Australia are not necessarily accessible to all parts of the workforce, and the deprivation which began in the 1980’s and continues today have blighted many New Zealand lives and led to generations of children raised in poverty. Other research about the actual benefits to beneficiaries of additional welfare spending make the point that some of the new money was immediately taken back in additional costs and it has been linked to harsh further measure for job seeking[xi] and CPAG research shows that as a per family payment rather than based on family size is it has not been well directed[xii].

I am surprised by the free rein that the BNZ’s chief economist has to make such partisan, misleading, and insulting statements of opinion.  They are more the views of a political hack rather than an economic analyst. It ill becomes a senior employee, whose professional opinion has been sought, to write a diatribe employing divisive language, half-baked analysis and inaccurate information.

Although Alexander’s writing will not result in the kind of social media storm caused by the hurtful and discriminatory comments of “Mad Butcher” Sir Peter Leitch earlier year, or Bishop Brian Tamaki or Kevin Roberts once head of Saatchi and Saatchi, it is no small thing to characterise left of centre governments as “elitist, know it all” regimes against whom the population are ‘rising up’ when evidence from the world’s major financial bodies points to inequality and the associated desperation as the cause. This ill-considered opinion piece masquerading as analysis both angered and insulted.

As a BNZ Bank customer I have for a while  been concerned about the more than $1bn in profits that are sent  to Australia each year, but have stuck with the bank because of its well-advertised innovation, including in the area of credit card and cash machine security.  After reading this article, I believe I can do better than bank with an organisation whose chief economist insults the intelligence its customers with a poorly analysed and partisan diatribe.

[i] The Challenge of Economic Inclusion by Christine Lagarde  https://www.project-syndicate.org/onpoint/the-challenge-of-economic-inclusion-by-christine-lagarde-2017-01 IMF president Christine Lagarde cites research to show that “The IMF, for its part, considers a more equitable income distribution to be not only sound social policy, but sound economic policy, too.

[ix] Junior doctors’ strike: ‘We’re absolutely broken’ https://www.newshub.co.nz/home/health/2017/01/junior-doctors-strike-we-re-absolutely-broken.html This describes the desperate circumstances of junior doctors which have been to some extent ameliorated by a successful strike action.

[x] The holes are getting bigger in the safety net provided by the Community Sector Hui-e Annual survey of the NZ community and voluntary sector  2016  http://www.huie.org.nz/featured/comvoices-state-sector-survey-2016/

[xii] CPAG’s Budget Review 2015: An analysis of the New Zealand Government’s 2015 Budget (Aug 2015)  http://www.cpag.org.nz/assets/Budget/2015%20CPAG%20BUDGET%20REVIEW.pdf The report shows increasing inequality both the before and after housing costs with the poorest quintile(20%) spending 54% of income on housing costs.