You are here: Home / Democracy / A new ethics for the public realm? Lessons from the Second World War. 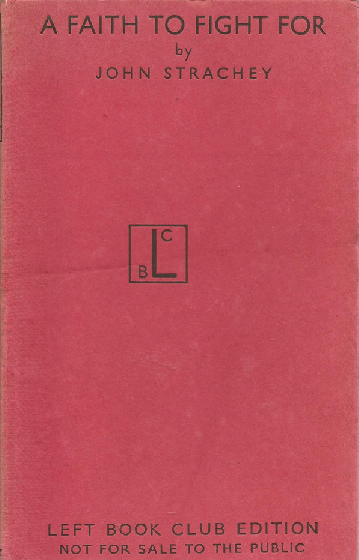 I’ve recently read A Faith to fight for” which was Left Book Club founder John Strachey’s lengthy letter to his daughter, written during The Blitz for her to read in 1951 (should she survive – luckily she did). Under this situation of duress Strachey felt compelled to look at the ultimate values by which to live. The book was quite different from his other writing – economic analysis and advocacy for socialist politics. His short book is a personal testimony about the importance not only of love, but also of truth in politics; in particular he describes how Fascism was skewing them both (and how to a lesser extent capitalism “in countries like ours” was doing the same).

During the 1930’s Strachey had first thought of Germany as just another colonial power until he realised it was something fundamentally other. He wrote about specific examples where Nazi science strayed from the scientific method in an explicit way by including “Aryan sensibilities” to create a “science suitable for German culture”. He also wrote about how the truth became aligned with what the German state ‘wanted it to mean’ whereas in a freer environment (Great Britain) competing truths could be acknowledged. He described beginning to value an ethical framework and how unsatisfactory were his early contacts with ethics. Focusing on personal, generally sexual, morality he said that  ethics had initially lost its relevance to him and his generation and so an important part of the book is about reclaiming an ethical framework as a guide.

Strachey’s understanding of love was not romantic or even familial but about acting with love towards others. It was broadly “do you act for your fellow man or don’t you?” He definitely saw that with this concept of love came an important dimension of people’s economic well-being and that good government involved acting in favour of people in general rather than in favour of corporations as was happening in Germany. As with truth he recognised that love could also be manipulated and misdirected, describing the “love for fatherland” in German politics.

His conception of truth was hard-edged and challenging – “cold and intellectual”, “a star to steer by” and had, as its base, the scientific method. He described honouring the truth as a moral stand that asks much of us in terms of rigour, in facing risk and  sometimes requiring great courage.

He analysed why the truth is such a hard master and gives two reasons. Firstly we seem to be hard-wired to fool ourselves in order to ease the pain of living. He cites the myths, legends and magical beliefs whose origins provided comfort in the face of nature’s caprice and our uncertain personal circumstances and he argued that these are part of the reason for the creation of religious faith. The second is the power that accrues to those who tell untruths. The ruthless can build their power base with lies and the powerless elide the truth in order to seek preferential treatment, to buy influence or to avoid the discrimination of the powerful. It follows then, said Strachey that “the opposite of truth is not lies but power”.

He goes onto explain that an important aspect of our human evolution was the process of developing the ability to look at the natural world through a scienctific lens. He describes many instances when this happened but in particular the Greek Philosophers and the Renaissance as being noteworthy examples. With a scientific perspective came the ability to analyse the social and human world and, he argues that this permitted people to observe and analyse information about unfairness, injustice and inequality using the disinterested methods of scientific enquiry. Seeing the truth in this way was (and is), he argued, revolutionary and threatening to those in power. He makes a claim that this study of scientific truths was sufficiently threatening to Roman power structures for example that the Empire replaced the whole developing scientific / philosophical edifice of Roman society with Christianity to stop it. This, he says, collapsed scientific truth-seeking thinking in the West for 1500 years. This is the most powerful part of the book. In 1941 it appeared that the threat of Nazism – the 1,000 year Reich  and its dislocation from truth – could herald another lengthy dark age. I’ve not studied history and can’t properly analyse the truth of his claims about Rome but to support his argument he explains that Greek mathematician and engineer Hero invented the steam engine; steam power was used for opening temple doors, but was then lost for 1800 years.

Why write about this now?
Once again the need for love and truth in public life are becoming part of the public discourse.

The BWB book The Interregnum is a compelling critique of current politics by a series of young writers. The title says it – the current regime is dead but won’t lie down – and the new is yet to be born leaving us in a particular place of looming crises and great uncertainty. A chapter, by New Zealander at Oxford, Max Harris is about need for a different view of politics – one which incorporates love. Max has been working with Shamubeel Eaqub who is also including the idea of a politics of love in his public advocacy work for a new & kinder economics. Overseas the Philosopher’s Mail – a website of popular ethics and philosophy, dedicated to seeing the world clearly and with compassion, has a large audience. In NZ and beyond Mindfulness and meditation as a way of living with clarity and compassion are an increasingly important focus and a potent part of young people’s political expression.

The truth is in short supply in politics. Spin, message management  and the creation of confusion impact on people and affect their willingness and ability to engage. Since the term was coined in 2005 there have been frequent articles about how truth has been supplanted by truthiness – information that is plausible (or often repeated) but not actually true. Just earlier this month a Radio New Zealand story questioned whether we have reached an era of ‘post-truth politics’

Huge public relations efforts go into denying  that there is an increase in inequality, that there is a homelessness crisis or the news that NZ is indeed a tax haven. Cliches like ‘it doesn’t make economic sense’ or ‘funding what works’ have nonetheless seen cuts to public services including counselling, suicide prevention, public housing and so on. Money is funnelled covertly to attack and silence public health scientists. Poverty researchers and environmental scientists are told that other views contradict theirs – as if science was just a matter of contrasting opinions. Frequently chastisement and denigration accompanies the assessment of views that contradict the government line: opposition politicians are “barking mad”; public servants and scientists are “troughers”; Housing NZ tenants are “P addicts”.

This lack of truth and love go beyond the specific instances to the whole framing of public and political life. When public action is sought only to overcome “market failure” we are building a world which determinedly advantages corporations and minimises the goods provided by social solidarity.  Austerity, both in terms of the reduction of the proportion of GDP used to fund the public realm and the lack of year on year increases to match population growth and inflation, has been the main public policy in NZ since the 2008 Global Financial Crisis and yet it barely speaks its name either in Parliament or in the media.

Seen in this light the lack of love and truth in the political sphere do seem to be fundamental in the current low rankings for NZ politicians. Our leaders don’t seem to love us and they can often evade telling the truth. Without truth we are  infantilised, turned off and made cynical by the politics we face. The cold light of truth and the warm glow of love should be part of a renewal of any politics worth having.

Extract from A faith to fight for