You are here: Home / Democracy / The Death of God and the War on Terror 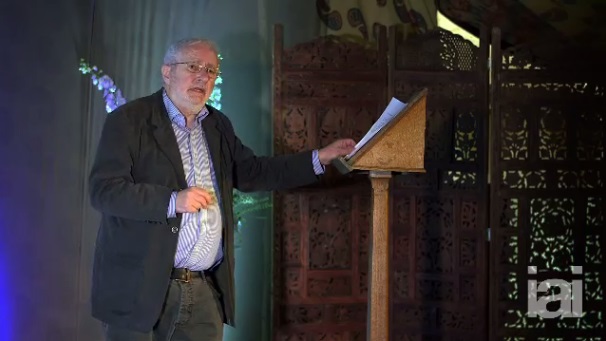 Link to the video

This article attempts to give a flavour of a videoed talk by Terry Eagleton “The Death of God and the War on Terror” which was made at the How the Light Gets In festival in Wales in May this year and which is taken from ideas in his 2014 book Culture and the death of God. To start at the conclusion Eagleton believes that the free market West has to bear some responsibility for the rise of fundamentalist terror perpetrated by people who claim Christianity or Islam as their ideology.

However his thesis requires some scene setting. Eagleton describes the move away from faith traditions and he makes the observation that atheism has always been difficult – not for individuals but for whole populations. As hard as you might try, he says, religious belief has come in through the back door even as it is being pushed out through the front door.

He elaborates this by saying that history is littered with the rubble of failed alternatives to God and added that religion is the most popular cultural symbolic system in the history of the world. Although it’s not studied in courses on popular culture, religious belief has surpassed all of the alternatives. He lists these as the arts, science, culture, philosophy, the government and ‘the people’.

However, this has changed in the last 100 years. Eagleton doesn’t go as far as saying that we in the West now worship the market but he does point out that it is the separation of beliefs (which have become contingent and personal) and actions (the rise of market economics and its lack of an ethical framework) which have allowed a Nietzschian ‘death of God’ to occur in the form of an aggressive, value-free, marketised secularisation of public life.

Eagleton identifies the faithlessness of modem capitalism as originating from ‘the stout bourgeoisie” of the 19th and 20th centuries’. He describes people who secularised their working lives through interaction with the market despite their often deep personal religious belief.

He goes on to describe how this lack of moral framework in the West has had a hand in the destruction of a number of largely nationalistic and socialistic governments in Asia and the Middle East. Most recently this is evidenced by wars in  Iraq  and Afghanistan where the West’s intervention created a political vacuum into which fundamentalist Islam was able to move. However the history of invasions goes back much further.

He continues by suggesting that fundamentalism of all stripes, but particularly in the Christian and Islamic worlds, is the unhealthy result of the insatiable power of global corporations making whole groups feel marginalised, shamed and powerless.
Hence the rise of religious fundamentalism, Eagleton claims, is inextricably linked to the value-free use of market power. In the blurb of the conference organisers Terry Eagleton, “reveals the unspoken history of our supposedly faithless world”.

The dishonesty of the Iraq invasion – the dodgy dossier, the imported yellow cake uranium and the never found weapons of mass destruction – by the West, particularly the UK, Australia and the USA, and the mistakes following the supposed ‘victory’ have had an important role in creating the current crisis of governance in the Middle East.

From this perspective it doesn’t take much of a leap to understand that the “prevention of radicalisation” being undertaken is wholly inadequate to address the monster unleashed by Islamism and abetted by the West. The attraction of ISIS as well as other flavours of fundamentalism (including that of marginalised Christian fundamentalists) are deep seated responses to generations of inequality, poverty, denigration and imperial adventurism Eagleton is arguing. In this respect much of the Western response – particularly as seen in the US,UK and Australian – re-education, retention of passports, increased surveillance in Western countries and cruelty and indifference to those attempting to escape the chaos from Calais to Nauru act simply to reinforce the deep injustices already perpetrated.

Naomi Wolf’s ‘This changes everything‘ describes the need for a radically different approach to counter climate change – in particular that aggressive marketisation such as trade deals prevent effective actions from being taken. It wouldn’t be out of place to wonder if the West also needs a profound realignment of effort to address the challenges of terrorism caused by religious fundamentalism.

“The liberal agnostic West actually had a hand in bringing this illiberal, theocratic antagonist into existence,” he says “ even if it still refuses, in Prospero’s words about Caliban at the end of The Tempest, to acknowledge this thing of darkness as (in part, at least) its own.”Eagleton is an academic and cultural critic who writes regularly in the London Review of Books. If you are wondering about launching into the 34 minute video, be prepared for an avuncular, witty, low key but none the less blistering delivery.