You are here: Home / About Public Good / 2014 Conference / Is the quality of our democracy an election issue? 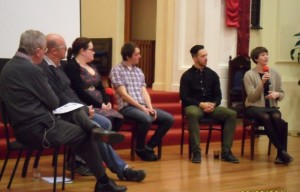 A well-attended conference in Wellington at the weekend heard and discussed a number of presentations which raised questions about the current quality of our democracy. The conference was hosted by the St Andrews Trust for the Study of Religion and Society and Public Good and the aspirations of many organisations and the approaches they are taking to achieve a richer kind of democracy were also on the agenda.

Professor Jane Kelsey outlined a number of specific and differing ways in which the secretive negotiation of trade agreements such as the Trans-Pacific Partnership Agreement (TPPA) – and their negotiation outside of a rules-based international framework such as the World Trade Organisation – impinge on our democratic rights.

Other keynote presentations included Bronwyn Hayward presenting the work she has been doing on citizenship education for children, and Michael Macaulay on progress towards our participation in the Open Government Partnership.

Presentations from organisations such as Loomio, OntheFence, JustSpeak and Askaway demonstrated the work younger people are doing to support and encourage democratic engagement and the inclusion of a broader range of voices.

Victoria Senior Lecturers Sandra Grey and Charles Sedgwick presented their latest research on the situation of non-governmental organisations many of which are also dependent on government funding. The number who felt they were highly successful in having their key concerns heard by government stood at 3.2%, and 76% felt that their role in providing dissenting voices was not valued by the government.

There were presentations about the need for quality information to be available through an unbiased, publicly funded television channel, about the extent to which our elections have become vulnerable to capture by big money, about participatory models of democracy and about ways in which democracy is being undercut.

Arising out of discussions seeded by the presentations, some key concerns emerged: conference participants regarded the lack of adequate information and/or opportunity to take a full part in democracy to be one of these. This was through poor quality of coverage in press and broadcast media, the lack of coverage of opportunities to make submissions and the excessive use of urgency in passing legislation, and real or effective disempowerment of marginalised groups. Another concern of conference participants was the need for our children’s positive experience of citizenship and democracy to be nurtured. There is also a need to raise awareness of the ways our ability to participate have been eroded. On a more hopeful note participants were keen to have opportunities to try out more active participatory models such as participatory budgeting at local government level.

Between the presentations identifying incremental encroachments to our democracy and the hopes for something better it seems clear that the quality of our democracy deserves to be something that people consider.

@felidaebay @radionz Hi Bay, TERF, as you well know is a slur used to try to incite violence & discrimination against feminists who are critical of transgender ideology. Please don't use it. If you do you are trying to normalise slur. #terfisaslur terfisaslur.com

@felidaebay @radionz I think you are mistaken with all of this. I don't think either accusation is true. Neither is your assertion of pre-colonisation transgenderism. Do you have proof? Otherwise you are defaming a group of women - telling lies to discredit them.

So this is @radionz's grudging attempt to cover the issue from a feminist POV. Nothing about the speakers? What about the evidence presented? What about explaining gender critical? Or perhaps not using it. Its great to have balance but what about linking to the SUFW website? twitter.com/radionz/…