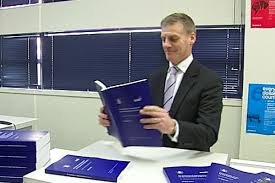 The real story of the coming election in neither corruption nor perceptions of corruption but rather what was revealed in Bill English’s reported pre-budget speech to the National Party’s Southern Region conference at the weekend. He signalled an intention to reduce the proportion of government spending to 26% of GDP over the next 6 to 7 years. The current level reported to be hovering at 30% already places NZ in the lowest quartile of OECD countries having fallen from 35% of GDP in 2008. Most developed nations, despite kinder geography and greater economies of scale, spend a significantly higher proportion of GDP on government goods and services. Bill English’s reported statement (I cannot find the whole speech online) is probably the clearest indication yet of the general direction of the National Party’s policies in a new term.

When parties approach a third term in government the claim is often made that it has run its course as far as new ideas are concerned. There are no manifesto policy announcements yet from National so we just don’t know how it is proposed that this objective be met. However it does reveal that the National Party’s basket of ideas is far from empty and that it does not regard status quo spending as desirable. To achieve this without cuts would require either extraordinarily high GDP growth, above historical averages which is very unlikely, or further large cuts to public expenditure.
For all those who hold dear the benefits to the wider population achieved by New Zealand’s Social Democratic project of the last 70 years this is where the election contrast between National and more progressive parties lies.

We do not know what cuts are proposed but the options identified below are either are continuations of existing policy directions by the National Party or have been signalled through press releases, law changes or speeches as possible initiatives.

It will be interesting to see in the lead-up to the election how this public spend to GDP ratio commitment is communicated . It seems to have been in a speech intended for party members and the bald fact of the lower ratio has not, so far as I can see, been signalled in other more public speeches.

NB. Update 31 May. The spending to GDP ratio was mentioned also in the budget speech but I have not seen its significance addressed in any media commentary of the budget.