You are here: Home / Democracy / Anti-TPPA tour around NZ : Filling out the picture 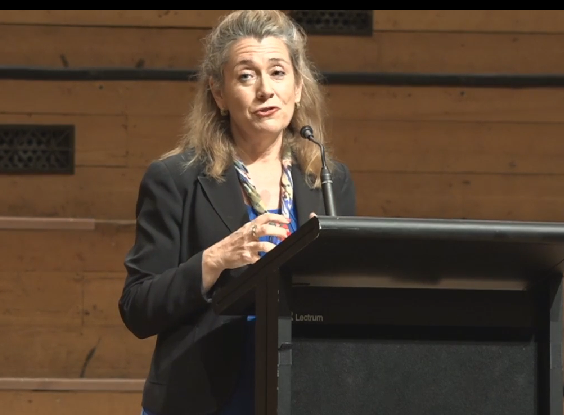 When Auckland Law Professor Jane Kelsey and Director and Lori Wallach, Founder of Global Trade Watch, a division of Public Citizen toured NZ this week they conveyed a series of messages that have not had much coverage by the mainstream media. Just for starters had any NZ commentator put two and two together to discover that no US Presidential candidate supportive of the TPPA is polling above 5% in any state?

There was standing room only and a sound system relaying into the street at the Wellington meeting against the TPPA on Wednesday night. Amongst the highlights from speakers were the following.

Lori Wallach also told us that the process in the US is far from certain and there is currently no majority for passing the legislation now that the 28 Democrats who were sweet-talked and threatened into passing the “fast track” legislation have actually seen the text. In contrast some pro-trade Republicans are also refusing to sign although for some this is because the TPPA text does not deliver sufficient capitulation to big business. (Advocates for the tobacco and drug industries are most vocal.) Because the deal is looking next to impossible in the US then NZ is in danger of passing preparatory legislation for an agreement that may never be passed.

Prof. Jane Kelsey told us about the US certification process. Changing our laws is no guarantee NZ will be admitted even when the government is ready to ratify. No TPPA signatory will be accepted whose laws don’t stand up to USA government’s own certification assessment of the changes required.  Jane also pulled the government’s GDP estimates apart saying that by 2030 the effective impact of the  TPPA will be  a 0.9% increase in GDP on an overall increase approaching 50%.

Wellington academic and economist Geoff Bertram also spoke. He was part of the independent economic analysis team whose work was independently peer-reviewed (as opposed to the government’s analysis which has not been independently assessed). He told us that the government’s case for the TPPA was that it would result in a reduction of trade barriers. However he said that the economic modelling shows that nearly all of the $2.7bn of additional GDP per annum estimated to be the benefit for NZ by 2030 will come from reducing non-tariff measures (NTMs) not the reduction of tariffs on traded goods. Calling the agreement a “trade agreement” is  a misnomer.

I’m reading between the lines here but many NTMs are essentially the regulations that businesses have to adhere to in order to operate in our country.  Some may relate to unfair trade practices although the government’s analysis does not identify any in this category and it is frequently argued that New Zealand is already an outlier in having lower costs of doing business than other OECD countries.  So the main benefit to businesses wanting to benefit from the TPPA in NZ is not lower tariffs but that our government will be cutting even more rules to lower business costs even further.

It gets even worse. Bertram said that the economic modelling for calculating the value of reducing NTMs is faulty – the logic built into the models by over-enthusiastic deregulators only allows them to work in 1 direction. Cut regulations and hey presto GDP increases no matter what regulation is cut. The models are not intended to take account of negative outcomes either to a specific sector or costs that are incurred by the country at large in a way that is naive if not fundamentally dishonest.  Infrequent but catastrophic “accidents” like  Pike River and Rena disasters have shown tragically how missing regulation does bring the costs of  human and environmental disasters in their wake.

Across many industries – agriculture, forestry, mining and shipping, injuries and deaths, spills & environmental damage caused by poor corporate behaviour  and allowed by light handed regulation are faced by individuals and the costs are paid by taxpayers and only to a limited extent by the businesses responsible. The TPPA’s NTM reduction provisions may increase profits to businesses but they will certainly add costs and occasionally trauma to ordinary New Zealanders to an even greater extent than happens currently.
Finally Canada has only just agreed to come to the signing ceremony a few days ago and their acceptance to do this is wrapped around with language making it clear that Canada’s ratification is by no means a certainty. Canada’s Trade Minister Chrysta Freeland was previously a publisher and her recent book on globalisation, inequality and poverty “Plutocrats” was also the subject of a 2013 TED Talk. Her Trade Secretary David Lametti was formerly a law professor specialisng in ethics. Neither appear to be people who would readily tug the forelock to the US in return for a golf game or a photo-op.

References:
There are some great, recent articles on the information that is coming out of the independent analysis which is at https://tpplegal.wordpress.com/
Brian Fallow TPP economy figures tell us nothing
Gordon Campbell on Scoop Why the TPP is something we shouldn’t sign and