You are here: Home / Democracy / Why Scoop is crucial to New Zealand’s democracy

I’ve supported Scoop’s crowd funding. Can you spare some cash to support Scoop as well?

With almost completely foreign ownership of our newspapers, the loss of TVNZ7 and Heartland TV and the loss of nationwide broadcasting for Triangle TV  in the last few years  and  Radio NZ having suffered 7 years of fixed budgets our access to effective news services is in a parlous state. In this setting Scoop Media with its 16 years of reporting and providing a voice to NZ communities, is more important than ever. By publishing  press releases from civil society and political organisations, as well as it’s own content like the Gordon Campbell’s Werewolf and journalism,  Scoop is unique in the media landscape.

New Zealanders read Scoop extensively for news and research. There are about 400,000 unique users each month and the site’s coverage has more depth than most other NZ news sites.  However because of the fall in advertising revenues Scoop is moving to a  social enterprise / community based funding. Scoop is currently running a crowd-funding campaign to change the governance arrangements and to implement other exciting developments.

Scoop’s value to New Zealand is broad – but in particular it frequently publishes stories that are crucial to our democracy but do not make it into the “mainstream” commercial  media. Often governments have not made it easy to find out what they are doing and how to get involved.  NZ’s advocacy groups and social commentators frequently make information available via Scoop that would otherwise remain effectively hidden.

Here are just a few examples chosen at random.

Example 1: Sir Geoffrey Palmer made a major speech a few weeks ago on the international legislation arrangements related to climate change. In the rest of the NZ media – the web based media at least – from NBR to Stuff, the NZ Herald and TVNZ there was not a single mention. The Dom Post had an article in the newspaper but apparently not on Stuff. In contrast Scoop has published not only the press release but the entire speech. It was regarded as so significant in the circles of people who heard about it that I received the PDF several times by email.

Example 2: At the beginning of February Auckland Barrister Frances Joychild wrote a major article about the impacts to people needing help with civil cases and their lawyers because of changes to Legal Aid. As things stand these days only the very poorest are eligible for assistance. The tales of desperation she describes are heart breaking and could happen to any of us. She says – and this is confirmed by Justice Helen Winkelman’s lecture late last year at Otago University – our Courts are stuffed with desperate people trying to represent themselves , or worse taking the law into their own hands. Although it was widely circulated to the media it appears no news site published a story about it in the mainstream media – at least in the media web sites I searched with Google. If it weren’t for Scoop this story would not have gone beyond Frances’ legal colleagues. Happily it did, and here I declare an interest, as I wrote the press release that was published on Scoop.

Example 3: The mainstream media’s coverage of the TTPA has been abysmal. But there are other negotiations going on that barely rate a mention.  The Trade in Services Agreement (TISA)  is another agreement under negotiation by the NZ Government which would make it harder to keep public services in public ownership or to regulate financial services like banking and insurance. In June 2014, even before a Wikileaks leak made the TISA visible to the rest of the NZ media, Scoop already had numerous stories from NZ and overseas referencing the agreement. At that time references in the rest of the NZ media amounted to a single passing mention in the in the Otago Daily Times. 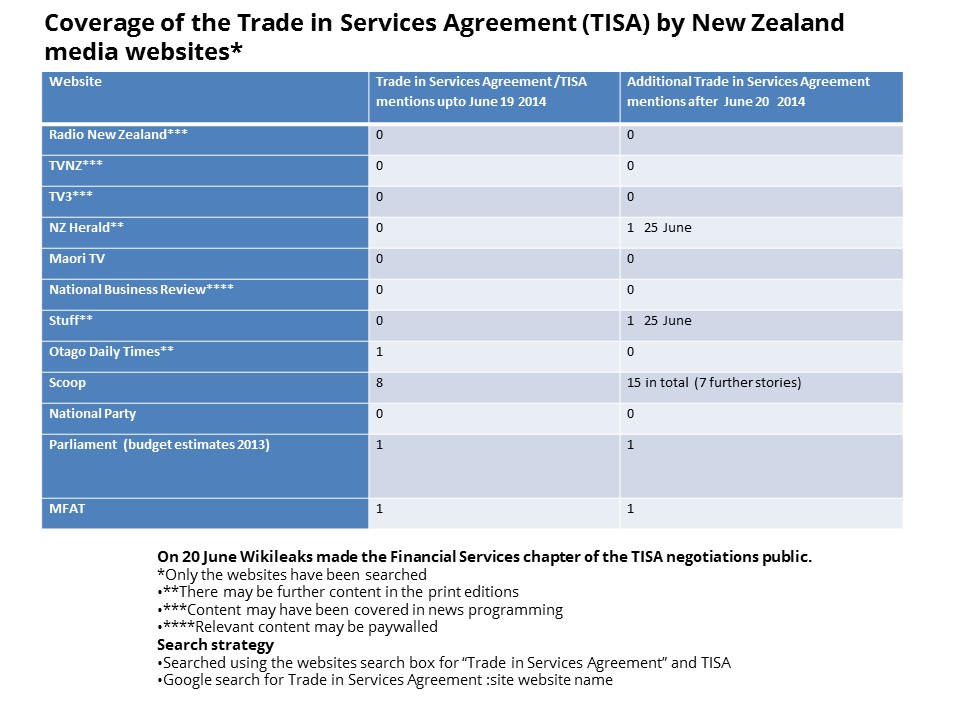 Example 4: There was little information in the rest of the NZ media about innovative research carried out by Alex Clarke at Victoria University on whether people would be willing to pay for online access to news. I cannot find coverage of this important story on other New Zealand news web sites. The information is available from Scoop though, and the answer is yes – provided that the offering and the price is attractive.

Example 5: When Nick Smith made his annual Nelson Rotary Club address in January about proposed substantial changes to the Resource Management Act most media outlets produced stories  about the speech but had neither the full speech nor the related research online. In the days following the speech it was not available via the Nelson Rotary Club site or Nick Smith’s National Party website. It was not available from the Ministry of Business Industry and Employment or Treasury websites – these were the the government agencies who had commissioned the research. It was not available on the website of the think tank Motu, the organisation that had carried out the research.  In contrast the speech and the research Smith relied on were to be found on Scoop (and Radio New Zealand) just a few hours after the speech had been delivered.

For these reasons and because of the importance of independent, NZ-owned news service I’ve supported the Scoop fundraising effort because it is a crucial aspect of our democracy. I hope you will do the same.