You are here: Home / Democracy / Universities and Scoop’s Licencing. 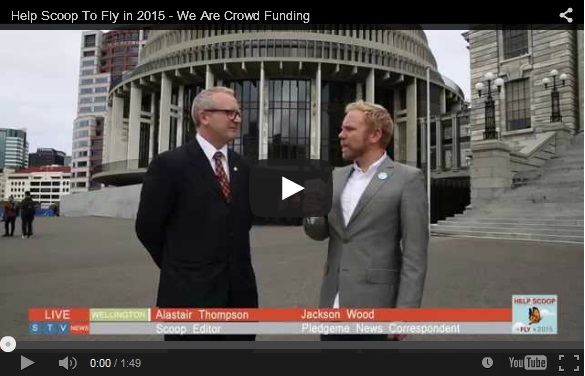 In the National Business review last week a story covered Scoop Media’s innovative licencing arrangements, which have been in place for a number of years. Rather than a paywall that excludes everyone who cannot pay, Scoop’s licencing conditions make the extensive database of NZ and overseas news stories available to the public at no cost, but their terms of use make a claim on commercial users (including institutions with large numbers of occasional users) for usage fees.

I have been aware of this for three years since Scoop announced its change in use policies at Nethui in July 2012 in an article headed “NLA vs Meltwater: Protecting Online Content Without Paywalls”.

“Adopting Meltwater At Scoop.
After the Meltwater ruling Scoop Media adopted and published terms and conditions of use on its website that limit the free usage of Scoop content to non-commercial users.
These term and conditions endeavour to protect Scoop’s availability as a public news source while maintaining Scoop’s viability as a commercial entity.
Scoop believes the Meltwater decision provides the basis of equitable regime founded in the most basic principals of copyright law, namely that content creators ought to have control over income earned from the use of their work.
Scoop considers this case to be hugely important in relation to the funding of news production in New Zealand, and we commend it to Nethui as a topic for urgent discussion and action.”

Scoop’s current terms of use which are linked to “© Copyright” statements posted on every page define commercial users as:

“3.3.1. Commercial users include companies, organisations, institutions, partnerships, government departments, associations and societies, trusts and other entities, whether registered or unregistered, private or public, and whether for profit or not for profit that use Scoop Content in any professional capacity.
3.3.2. ‘Use’ encompasses, but is not limited to, downloading, sharing, e-mailing, direct linking, copying, reading, extracting, scraping, selling content, by employees, workers, agents or automated devices, or anything else what-so-ever that could be reasonably held to violate Scoop’s copyright pursuant to applicable copyright law and Scoop’s limitations of use.
3.3.3. ‘Use’ encompasses receiving, without an end user license, any Scoop Content from any unlicensed media tracking or monitoring service. Receiving includes in whole or in part, including by link.
3.3.4. Commercial users are invited to obtain end user licences from Scoop Subscriber Services Limited to legitimise use Scoop Content.”

With dwindling advertising revenues Scoop has decided now to make commercial and professional users including NZ institutions more aware of the licencing conditions and to ask for payment for purchase of ‘commercial use organisation licenses’ to recover the costs of providing a useful public service. The process began in January with letters to universities and polytechnics who – for good reason – are among some of Scoop’s heaviest users.

It is worth noting that Scoop’s decision to take this course of action has occurred as part of a larger process of transformation which it has called “Operation Chrysalis” in which it has announced its intention to change from a for profit media private media business into a not-for-profit news organisation held for the benefit of all NZers. Scoop is presently running a crowd-funding campaign via Pledgeme for this purpose.

In a response to the story yesterday also published on NBR Universities NZ executive director Chris Whelan has responded saying that “Scoop sent a “cheeky” cover letter to Universities asking for the licensing fees from 2012-2014 and agree to only charge for 2015.”

Amongst the arguments Whelan makes for why universities should not pay the licence fee is that they don’t use Scoop for teaching or research. As the article is behind a paywall an excerpt of what Whelan said is included here:

Universities don’t use Scoop for teaching or research, according to Mr Whelan.

“Out of nine or ten thousand staff there will undoubtedly be a few that work in politics or journalism [and use Scoop] but to the best of our knowledge we’re not aware of anyone doing any research or teaching with Scoop resources.”
However, Mr Thompson says Google Analytics shows that around 10,000 unique users from the .ac.nz domain (NZ tertiary institute domain) access Scoop every month and view around 30,000 pages.
He says this is an understatement because it excludes non-identified network users, mobile users and faculty staff using Scoop at home.
“At this point we have received no substantive responses from any of the universities to our communication. We look forward to them responding to us directly.”
Mr Thompson says discussions with polytech institutes “are more advanced” due to pricing structures accommodating lower usage.
He adds that student usage will not be charged because they are not using Scoop for work.
…
“The fact that CLNZ doesn’t currently pay anything to Scoop may reflect the fact that Scoop content isn’t being used in university courses and, as a result, doesn’t show up in the surveys that CLNZ uses to work out who to pay,” Mr Whelan says.
“We’ve written to Scoop saying that we don’t believe we have any obligation to pay them and effectively we pay CLNZ to avoid this issue.”

There is something deeply ironic about this important debate taking place inside the NBR paywall, in a set of news stories which are by and large unavailable to the public. The Universities,- who Scoop editor Thompson is quoted as saying had not responded to his letter till yesterday – complain about institutions being asked to pay for services which are open access to the general public inside a walled garden which they are paying to access.

The universities executive director says that Scoop should just sign up to the print copyright management (PMCA) arrangements in NZ. These are the traditional print media’s way of charging for multiple use and which has been the basis for charging extra fees for librarians who select and circulate stories within their institutions. But Scoop has never been part of those arrangements and the PMCA, according to Thompson, doesn’t yet have an online news content licensing arrangement in place.

If Whelan has a problem with New Zealand’s Universities paying licence fees for access to Scoop’s information then maybe there is an argument that Universities should not pay for access to “behind the paywall news services” like the NBR. Perhaps university libraries should also stop paying for access to journals from the commercial online libraries of academic publishers like Wiley, Lexis-Nexis and Proquest (including frequently material paid for by NZ tax-payers) for which the costs to New Zealand’s universities are in the millions of dollars each year.

The contrast between these services and Scoop is that they do not have the added benefit of being available at no cost to the public.

Whelan is also on dodgy ground when he begins to argue that universities should not pay for access to services that their academics and students have not used. Scoop’s Alastair Thompson says Google Analytics shows that around 10,000 unique users from the .ac.nz domain (NZ tertiary institutions domain) access Scoop every month and view around 30,000 pages.

The plain truth is that academics and students as well as university librarians do use Scoop extensively for research. This is because Scoop frequently publishes news about issues that does not make it into the mainstream media. If he doubts this here are just a few examples chosen at random.

Example 1: Sir Geoffrey Palmer made a major speech last Monday on the international legislation arrangements related to climate change. In the rest of the NZ media – the web based media at least – from NBR to Stuff, the NZ Herald and TVNZ there was not a single mention. In contrast Scoop has published not only the press release but the entire speech. It was regarded as so significant in the circles of people who heard about it that I received the PDF several times by email.

Example 2: At the beginning of February Auckland Barrister Frances Joychild wrote a major article about the impacts to people needing help with civil cases and their lawyers because of changes to Legal Aid. As things stand these days only the very poorest are eligible for assistance. The tales of desperation she describes are heart breaking and could happen to any of us. She says – and this is confirmed by Justice Helen Winkelman’s lecture late last year at Otago University – our Courts are stuffed with desperate people trying to represent themselves , or worse taking the law into their own hands. Although it was widely circulated to the media it appears no news site published a story about it in the mainstream media – at least in the media web sites I searched with Google. If it weren’t for Scoop this story would not have gone beyond Frances’ legal colleagues. Happily it did, and here I declare an interest, as I wrote the press release that was published on Scoop but not elsewhere in the media.

Example 3: Finally in June 2014 even before a Wikileaks leak made the Trade in Services Agreement (TISA), which is under negotiation by the NZ Government, visible to the rest of the NZ media Scoop already had eight separate stories referencing the agreement. References in the rest of the NZ media amounted to a single passing mention in the in the Otago Daily Times.

However the usefulness of Scoop to universities is not only for carrying out research. Many departments also use Scoop to get information about their research into the public domain. To take just one apposite example, I challenge Whelan to find information in the rest of the NZ media about innovative research carried out by Alex Clarke at Victoria University on whether people would be willing to pay for online access to news. I cannot find coverage of this important story on other New Zealand news web sites. The information is available from Scoop though, and the answer is yes – provided that the offering and the price is attractive.

It behoves university administrators to think very carefully about the effects of failing to honour a licencing agreement that has been in place for a number of years and which has now been brought to their attention.

Scoop is a publisher which serves the wider community and gives voice not only to the academic community in NZ, but which also provides consistent coverage of local government, community, Pacific and other sectors which increasingly slip through the cracks left by a decaying traditional news media industry.

Scoop provides a research and current information resource that is not available elsewhere; and thereby helps universities to fulfil their primary role of being critic and conscience to society. And Scoop supports the work of universities by helping to bring their research to the public’s attention.

In short there was nothing cheeky about the expectation that organisations that make use of a service to pay for it. As with other news and research resources this happens already.