You are here: Home / Democracy / Fanning the #StepitUp flame

The last weekend of November saw a weekend conference take place in Auckland. Stepitup’s purposed was to build capacity, capability and new skills amongst progressive campaigners and organisers in NZ. The conference was based around “the simple idea that we can do more and win more through cooperation, sharing resources and breaking down the silos”. There were about 200 attendees who came mainly from environmental and social justice campaigns.

For a small Wellington audience writer and disability advocate GiovanniTiso and ActionStation’s Marianne Elliott took time out to reflect on the parts of the conference that had been most impactful to them. The breadth of presentations, panels and discussions was diverse and plentiful and so their presentations were a snapshot. To support the feedback session graphic recorder LindaGilbert summarised the discussion in the images (which will be added to this post shortly). Graphic recording is a great skillset for activism and I’d recommend Linda and her colleagues as providing good skills for activist and campaigning events.

Nicky Hager and the media

Nicky Hager’s keynote speech – was similar in many respects to his 2012 BruceJessonlecture where he talked about the poor state of New Zealand’s media. Hager said that the effective role of newspapers has gone, and that we shouldn’t blame journalists for this. Nicky doesn’t think that the proliferation of blogs and informal social media is an adequate alternative and sees the necessity for improved general journalism rather than the development of excellent niche journalism as most important. 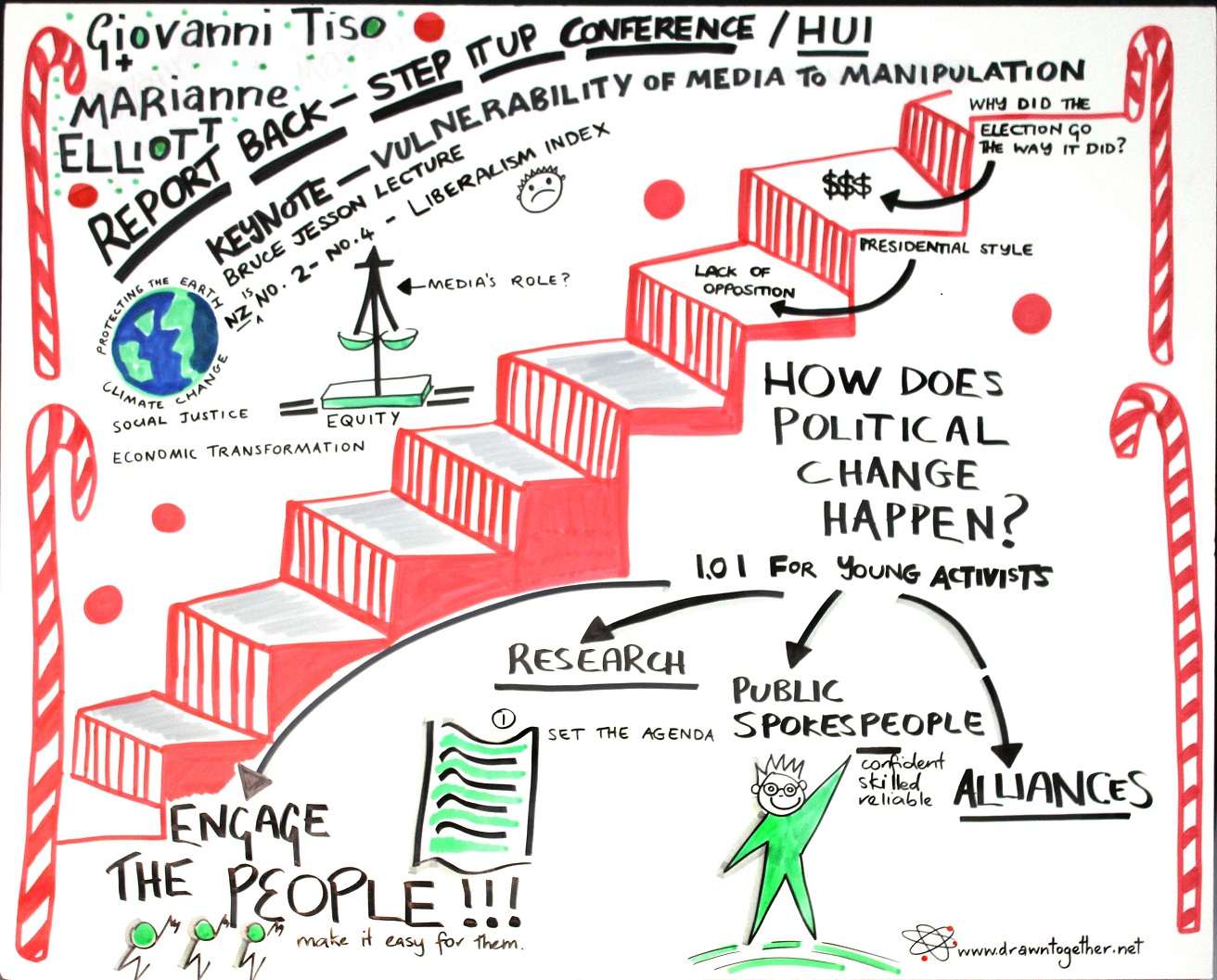 Nicky also made the following points about effective campaigning:- 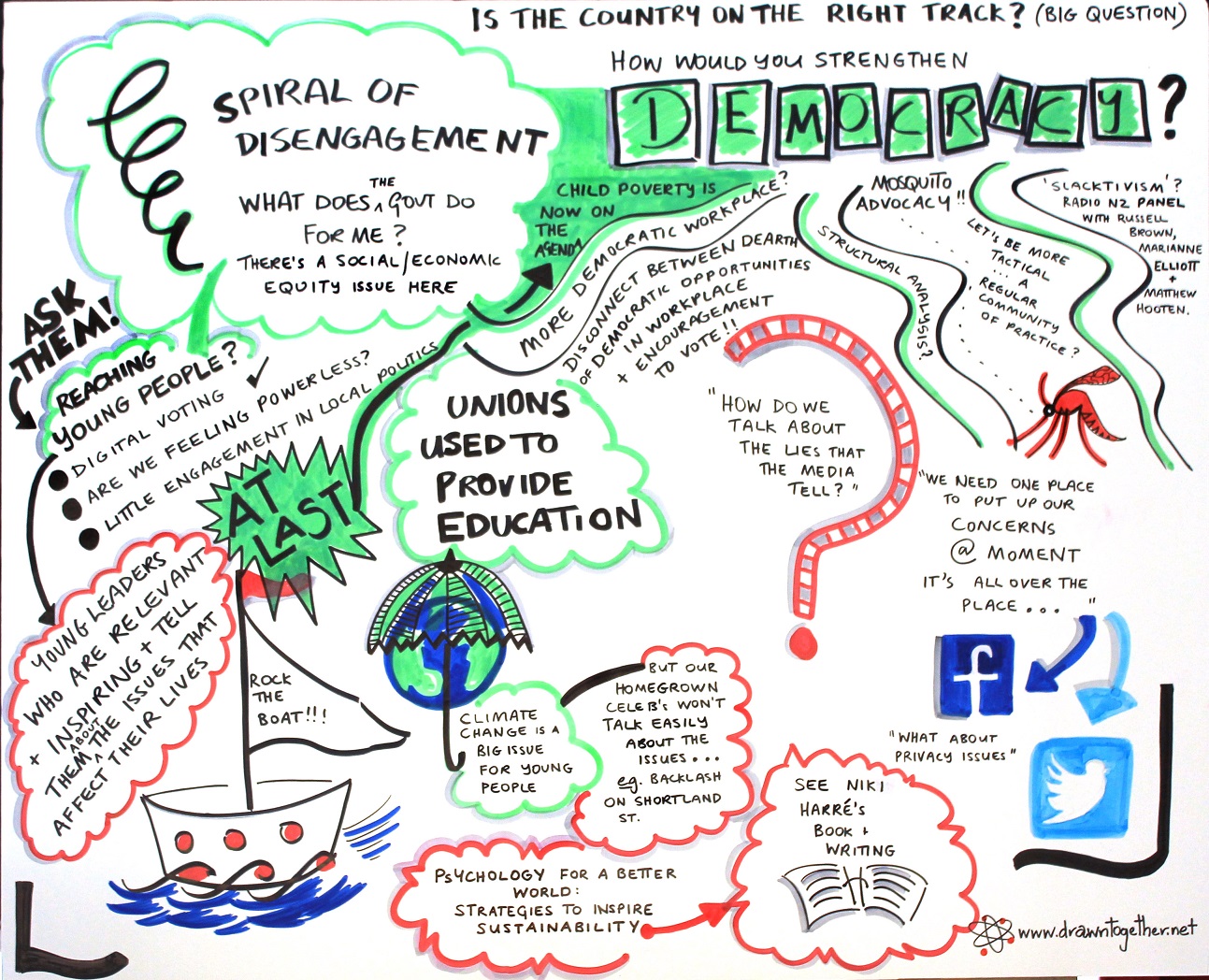 Marianne summarised a presentation about fund-raising where Jeff Harrison, who recently moved to Auckland to work for Greenpeace talked about goal setting for movement and member based fund-raising and the importance of making occasional donors into people who will make a regular financial commitment. His view was that campaigns need to ask and ask again. Marianne also summarised presentations and workshops on democracy. Broader issues of democracy such as workplace democracy were discussed (we spent more time at work but often have few democratic opportunities there). Other material that overlapped with some of the outputs of the August Democracy, EthicsandthePublicGoodconference related to the role of the media in supporting and protecting democracy, the incursions into democracy we are seeing currently and the role of citizenship education.

The conference agenda and discussions were so full we could have listened for hours instead of an hour and a half.   Just to finish here is information about a couple of other presentations that took place.

Also on the topic of the media a panel with presenters Giovanni Tiso, Julie Fairey and Russell Brown discussed the role the media had played in the election.

Julie made the point that the election campaign was almost entirely focussed on personality at the expense of policy and that, after the publication of Dirty Politics attempts to get issues aired such as domestic violence, disability issues or the right to abortion addressed in the campaign foundered. She also noted that the media narrative was focussed on the ‘popularity of and the inevitable victory for John Key’. Nicky had noted that the election was run in presidential style but with only 1 presidential candidate and as an election where the overwhelming financial advantage of the National Party was notable. 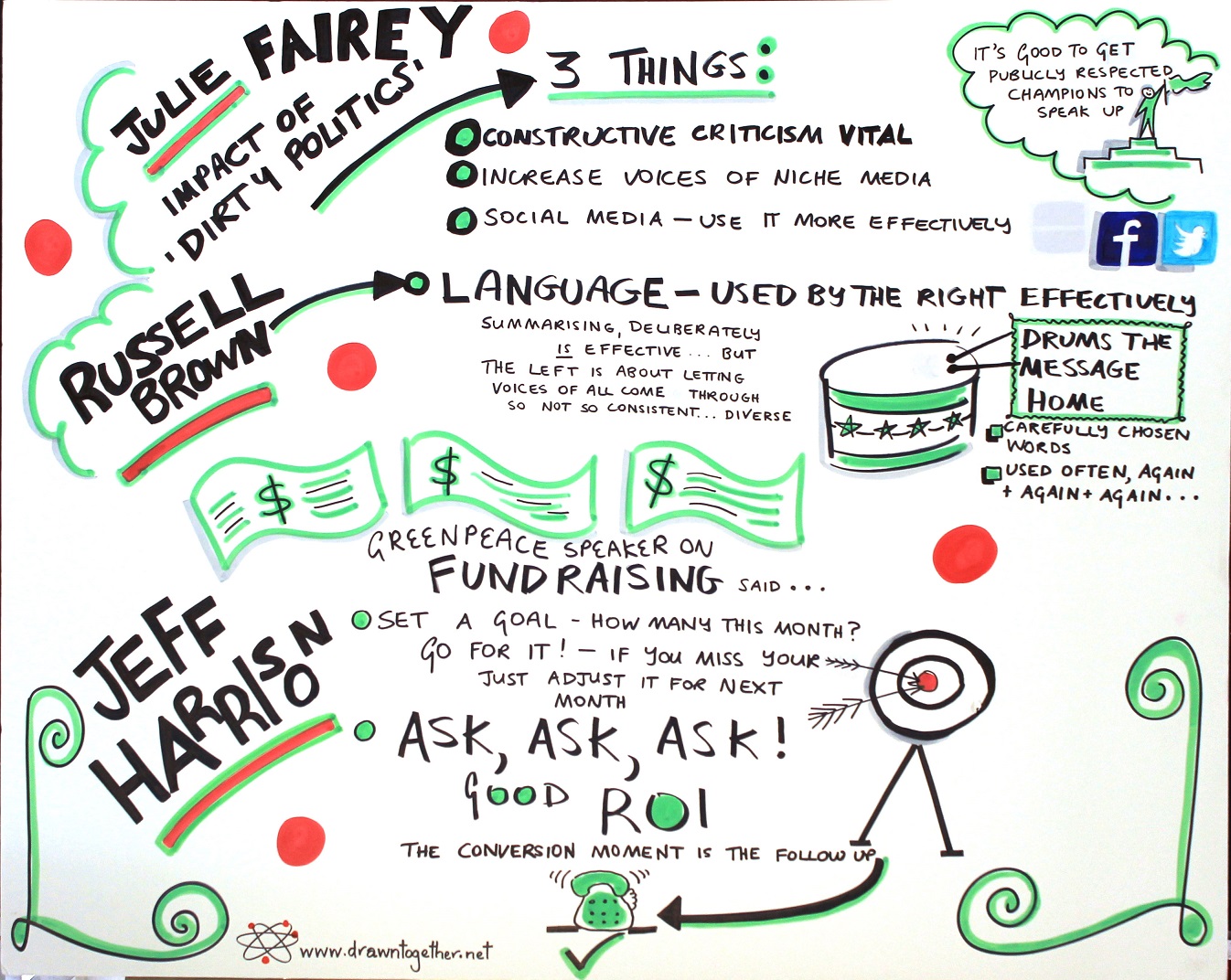 Once in a lifetime: rebuilding Christchurch

Giovanni talked at StepitUp about his involvement with OnceinaLifetime:CityBuildingafterdisasterinChristchurch. It’s a compilation of 55 written essays and 35 visual essays and was conceived of and put together by a group of mainly young people in Christchurch and published in the lead-up to the election by ProjectFreeRange a NZ based publishing cooperative. Giovanni said that the intention was to present a kind of ‘briefing to the new government about Christchurch.

Academic and psychologist Niki Harré whose recent book Psychology for a Better World: StrategiestoInspireSustainabilityaddresses exactly what is says in the title by looking at the how to develop campaigns using an understanding of what motivates and demotivates activists and what approaches are more and less helpful for the environmental challenges ahead. Sue Bradford summarised her recently completed PhD as part of a nation-wide tour talking about transforming her idea into reality and she spoke about her goal of developing a left wing – politically transformative think tank. If you are interested in this project it is accepting donations here 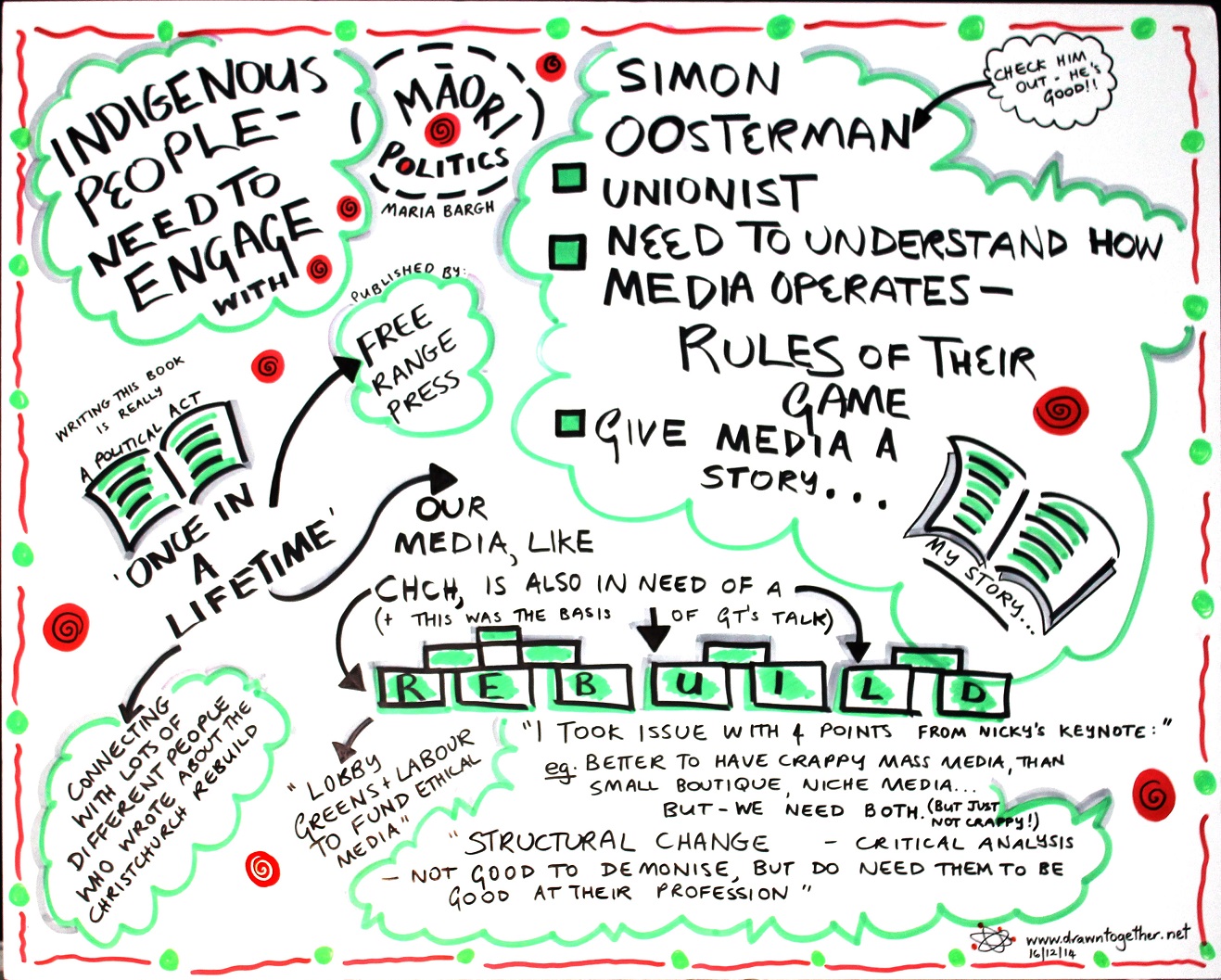 So how can Wellington respond to the ideas coming from StepItUp. Kirk Serpes Auckland based conference organiser is going to produce a conference report including from other sessions at the conference where workshops discussed the successes and failures of campaigning methods used in some of NZ’s most impactful and successful campaigns.

Marianne has proposed that Action Station support some regular campaigning skills building sessions from the New Year and she has already been meeting with others including Mike Smith from NZ Fabians to ensure that the energy lit by StepitUP will continue to grow.