You are here: Home / Democracy / Speech to the clean politics rally Parliament 10 September 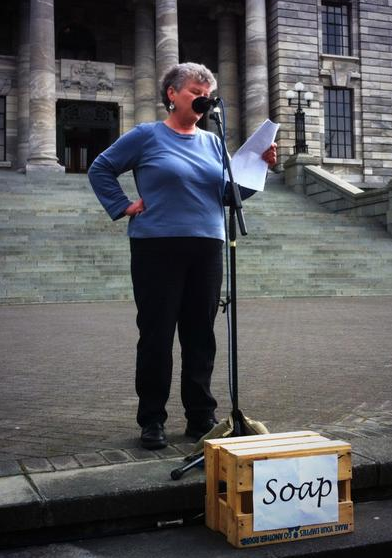 Several people at the rally asked me to publish this speech. Here it is

We held a conference at St Andrews on the Terrace on Aug 1 and 2. The topic was democracy, ethics and the public good. But the Public Good is really much more of an idea than an organisation.

Why did people want to come?

There was a worry that the real issues of our country are not being covered by politicians or the media.

If you want to judge whether we are being told about the real issues by our government and the media listen carefully to these examples. These are some important issues – not whether a photograph of Judith Collins looks more or less appealing when she is upside down. These are not dirty politics but they are what has come to be politics as usual in New Zealand. The real issue is that they are all of great public interest and they are not part of our national conversation. And I don’t think it’s good enough.

The government is investigating and trialling Social Impact Bonds. Social impact bonds allow private investors to invest in social programmes and to reap the benefits when the government reduces its social costs. This is a very worrying development. It is a rather neat and bloodless way of ensuring that the rules of the market overwhelm our social infrastructure and services. It appears to be very profitable:

The NSW government has just reported profits to investors on its first Social Impact Bond. This programme is working to put children in foster care back with their families. You can read all about it on the business pages of the Sydney Morning Herald. The chief executive of NGS Super, which invested in the bond, said he was “delighted” with the return of 7.5 per cent.

This approach to social welfare provision would not be out of place in a Dickens novel. Do we want our social services to be run in this way?

Our government has applied to sign up to the international ‘Open Government Partnership. They have done it in secret. If you talk to them they say the timing wasn’t good. But they sat on their hands for two years. The government’s plan will fail to be endorsed because there was no open consultation, damaging New Zealand’s international reputation for integrity and transparency.

It’s taken until two weeks before the election until one journalist, Bruce Bisset, wrote in the Herald about the real state of our economy. Treasury have been reporting this for over a year. This is what he said.

Our level of government spending is far lower as a percentage of GDP than the UK. It’s running at about 30% whereas in the UK it’s about 6% higher. The UK has a rigorous austerity regime in place.

Not only that, it has been falling at the same rate as the UK over the last six years.

Finance Minister Bill English wants to reduce our government spending to levels below those of many developing countries to 26% of GDP. We have already been overtaken on some estimates by South Africa and Kenya will overtake NZ soon. Many much poorer countries across the world have sharply rising government spending in recent years

We are signing up to trade agreements like the Trade in Services Agreement and the World Trade Organisation Government Procurement Agreement that would ensure that any future New Zealand government can privatise any public services but not buy them back. If charter schools fail we could not bring them back into the public system. A future government could be taken to an international court if it tried to bring public services back into public ownership. Legitimate democratic choices are becoming illegal.

Finally the foundation documents for Better Public Services, for all the good it may have done, is predicated on offering services for privatisation. When is that ever mentioned?

But I’d like to finish on a positive note.

We have written up all the ideas developed at our conference and there seem to be three themes. I can provide you with the draft wording.

We want to partner with others to

We want to do this in partnership with other organisations. If you are interested to see how this develops there are calling cards and leaflets at the front that link to the public good www.publicgood.org.nz website

Thank you very much.