You are here: Home / Democracy / An Open Government Plan developed in secrecy is a contradiction in terms 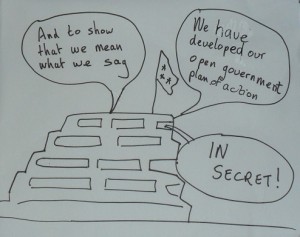 According to its website, the State Services Commission sent NZ’s Open Government Action Plan to the international Open Government Partnership (OGP) Secretariat on 31 July. The countries involved in the OGP since its inception – from the UK and US to Indonesia and Brazil – have signed up to meaningful and aspirational goals: better oversight, greater transparency and opportunities to involve the public in decision making.

This a great initiative for New Zealand then? On the one hand it is: NZ is committed to signing up. However without barely a nod to openness or the involvement of the public such an initiative would suggest the Government pre-selected the initiatives that were to be used as the basis for the plan. In the two meetings with the community and voluntary sector that did discuss the plan, participants were presented with three themes as ‘faits accomplis’.

The government’s proposed themes were:

Meeting invitees gave a strong message that an “Open Government Partnership Action Plan” needed to start from widespread consultation, openness and non-partisan ideas, not a pre-determined, pro-National Party agenda. Now the government has sent off the plan to the international secretariat for ratification and aside from the broad themes no-one outside of government has a clue about what the Action Plan contains.

So, apart from the secrecy about the OGP Action Plan is there anything really wrong with the Government’s approach?

I think there is.

The OGP action plan is about open government. It beggars belief that its content is a closely held secret. The OGP’s international secretariat also demands community involvement in the development of OGP Action Plans. New Zealand’s Action Plan is almost guaranteed to fail on this count. This is surely embarrassing for New Zealand’s usual good reputation for openness and good governance.

Next, two of the proposed themes are taken from National Party programmes that are related to the Government’s privatisation and cost-cutting agenda and are therefore partisan.

Better Public Services was never consulted on and is highly ideological. In its DNA it assumes that contracting out and privatisation will deliver better public services than public servants can. It presupposes that public services like social welfare and housing are essentially similar to private services like using a credit card or making an airline booking.

The second element of the plan is the Government’s Information and Communications Technology Strategy and Action Plan. However, the ICT Action Plan’s main purpose is to deliver savings of $100m/year to Government, which it aims to do by moving to ‘digital by default’ services. It does this without consideration for people who cannot use the standardised digital model because of poverty, disability, distance or language and literacy skills. This is important. Almost a quarter of a million New Zealand households have no internet connection.

The third strand of the proposed action plan – the implementation of some of Transparency International’s 2013 recommendations – is more promising. The recommendations are high-quality, evidence- based , non-partisan proposals arrived at after an open process and wide consultation. They include sorting out our political party funding, securing our strong corruption-free reputation in changing circumstances, and pointing out that our media, with its narrow owner-base and funding problems, is a bar to a healthy democracy. Even here the details proposed by government are nonetheless still a) secret and b) predetermined by Government and c) there are no guarantees that the government and community objectives are aligned.

Given the use of urgency, low levels of meaningful consultation and increased level of concern expressed by NGOs about their advocacy role and more recently the dirty politics revelations the Government must realise it is on shaky ground regarding openness and transparency. It has not been open with us about many things and so it’s hard to see how having NZ join up to the Open Government Partnership will be seen as anything more than lipservice. Even the most Pollyanna-ish amongst us might wonder quite what would change with an OGP Action Plan that has been devised by government with minimal public input and signed off in secret.