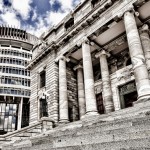 The real story of the coming election in neither corruption nor perceptions of corruption but rather what was revealed in Bill English’s reported pre-budget speech to the National Party’s Southern Region conference at the weekend. He signalled an intention to reduce the proportion of government spending to 26% of GDP over the next 6 to […]